The case for fraud in the 1988 radiocarbon dating of the Turin Shroud #1: Introduction

Note. I have now realised that this topic is going to require a lot of research, which will distract me further from my series " The Shroud of Turin." So I am putting it on the backburner until I get to the topic in that series of the 1988 radiocarbon dating of the Shroud, in "6. Science and the Shroud," which will be after I have covered "4. History of the Shroud" and "5. Art and the Shroud." That will enable me to then refer back to what Prof. Christopher Ramsey, Director of the Oxford Radiocarbon Accelerator Unit admitted was the "lot of other evidence that suggests to many that the Shroud is older than the radiocarbon dates allow":

"There is a lot of other evidence that suggests to many that the Shroud is older than the radiocarbon dates allow and so further research is certainly needed. It is important that we continue to test the accuracy of the original radiocarbon tests as we are already doing. It is equally important that experts assess and reinterpret some of the other evidence. Only by doing this will people be able to arrive at a coherent history of the Shroud which takes into account and explains all of the available scientific and historical information. Christopher Ramsey (March 2008)" ("The Shroud of Turin," Oxford Radiocarbon Accelerator Unit, Version 143 Issued 31/10/2013).

PS: Further to the above, see my series, "Were the radiocarbon dating laboratories duped by a computer hacker?": part 1, part 2, part 3, "Summary" and "My replies to Dr. Timothy Jull and Prof. Christopher Ramsey."

Introduction This is part 1 of a planned 7 part series of posts (see below), setting out the case for fraud in the 1988 radiocarbon dating of the Turin Shroud, which claimed that: 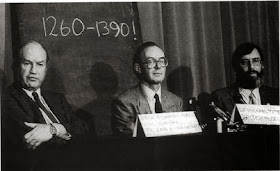 I had for a long time been thinking of posting on this topic, and was prompted to do so by reading recently what the agnostic Shroud pro-authenticist, art historian Thomas de Wesselow, wrote:

"The third possibility [why "the 1988 result ... conflicts with all the evidence that points to the Shroud having been in existence long before 1260"] is that a fraud was perpetrated ... Most sindonologists regard these fraud theories as plainly incredible. ... However, scientific fraud is by no means unknown, as the editors of science journals are well aware ... One important consideration weighs in favour of the possibility of deception. If the carbon-dating error was accidental, then it is a remarkable coincidence that the result tallies so well with the date always claimed by sceptics as the Shroud's historical debut. But if fraud was involved, then it wouldn't be a coincidence at all. Had anyone wished to discredit the Shroud, '1325 ± 65 years'[3] is precisely the sort of date they would have looked to achieve" (my emphasis)[4].

Indeed it is the flip side of Oxford physicist Robert Hedges' `killer' argument, that "it beggars scientific credulity" for the Shroud to be actually first century but its radiocarbon date be "within 100 years of

[Above: A pilgrim's medallion made of lead, found in the mud of Paris' Seine River in 1855[5], and today held in Paris' Cluny Museum[6]. The medallion has front and back images, head to head, of the Shroud, being held by two clergymen, as well as the coats of arms of the first recorded owners of the Shroud, the 14th century French Knight Geoffrey I de Charny (left) and his wife Jeanne de Vergy (right)[7]. It had probably been worn by a pilgrim to an exhibition of the Shroud at Geoffrey's church in Lirey, France in 1355, since he was killed in battle in 1356[8] and according to a memorandum by Bishop d'Arcis of nearby Troyes, Geoffrey was exhibiting the Shroud at Lirey, "thirty-four years or thereabouts" before 1389[9], in the time of his predecessor, Bishop Henri of Poitiers, who only arrived at Troyes in 1354[10].]

the first recorded history of the shroud" (in 1355-see above) as that would be "an amazing coincidence" requiring the neutron flux dose to have "been `fine-tuned' to better than one part in a hundred million":

"The processes suggested by Phillips were considered by the participating laboratories. However, for the reasons given below, the likelihood that they influenced the date in the way proposed is in my view so exceedingly remote that it beggars scientific credulity. ... Assuming a ... neutron flux, it is an amazing coincidence that the neutron dose should be so exactly appropriate to give the most likely date on historical grounds. ... To produce a date within 100 years of the first recorded history of the shroud implies that the dose has been `fine-tuned' to better than one part in a hundred million" (my emphasis)[11].

Or, as Professor Harry Gove, the co-inventor of the AMS (Accelerator Mass Spectrometry) radiocarbon dating method used to date the Shroud put it, the odd are "about one in a thousand trillion" against the Shroud having a radiocarbon date of "between 1260 and 1390" and "it dating back to the time of Jesus":

"According to Professor Harry Gove, prime inventor of the state-of-the-art accelerator mass spectrometry method that was used to carbon date the Shroud, the very same scientific criteria that provide a ninety-five per cent degree of probability in favour of the Shroud's manufacture between 1260 and 1390 also provide odds of 'about one in a thousand trillion' [12] against it dating back to the time of Jesus" (my emphasis)[13].

That is, if the Shroud is authentic, as the overwhelming preponderance of the evidence indicates that it is[14], then its linen must date from the first century, or earlier. But then for the Shroud's radiocarbon date to be AD 1260-1390, which `just happens' to be "within 100 years of the first recorded history of the shroud" would "beggar... scientific credulity" as it would be "an amazing coincidence" with odds of 'about one in a thousand trillion' against it"! But then it would then be far more likely (to put it mildly) that scientific fraud has occurred in the radiocarbon dating, to produce a date range, the midpoint of which, 1325 ± 65 years, `just happens' to be 30 years before "the first recorded history of the shroud" in 1355. 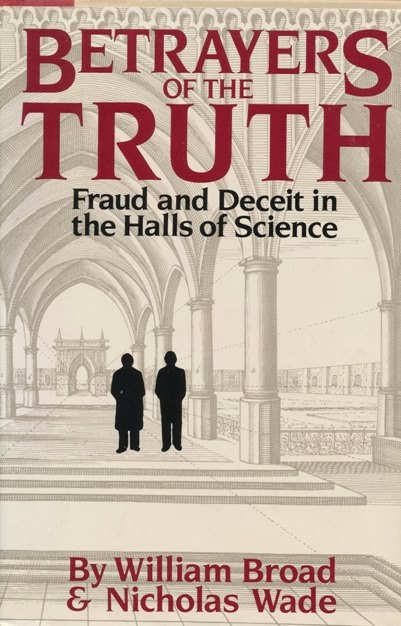 What do I mean by "fraud"? By "fraud" in this context I mean at least the definition of Broad and Wade (right), of "making results appear just a little crisper or more definitive than they really are, or selecting just the `best' data for publication and ignoring those that don't fit the case":

"The term `scientific fraud' is often assumed to mean the wholesale invention of data. But this is almost certainly the rarest kind of fabrication. Those who falsify scientific data probably start and succeed with the much lesser crime of improving upon existing results. Minor and seemingly trivial instances of data manipulation-such as making results appear just a little crisper or more definitive than they really are, or selecting just the `best' data for publication and ignoring those that don't fit the case-are probably far from unusual in science. But there is only a difference in degree between `cooking' the data and inventing a whole experiment out of thin air" (my emphasis)[15].

And the standard of scientific honesty that I expect of all scientists, including those involved in the radiocarbon dating of the Shroud, is that set by the late physics professor Richard P. Feynman (left):

"It's a kind of scientific integrity, a principle of scientific thought that corresponds to a kind of utter honesty - a kind of leaning over backwards. For example, if you're doing an experiment, you should report everything that you think might make it invalid-not only what you think is right about it: other causes that could possibly explain your results; and things you thought of that you've eliminated by some other experiment, And how they worked-to make sure the other fellow can tell they have been eliminated. Details that could throw doubt on your interpretation must be given, if you know them. You must do the best you can-if you know anything at all wrong, or possibly wrong-to explain it. If you make a theory, for example, and advertise it, or put it out, then you must also put down all the facts that disagree with it, as well as those that agree with it ... the idea is to try to give all of the information to help others to judge the value of your contribution; not just the information that leads to judgment in one particular direction or another ... I'm talking about a specific, extra type of integrity that is not lying, but bending over backwards to show how you're maybe wrong, that you ought to have when acting as a scientist." (my emphasis)[16].

However, I cannot prove that there was scientific fraud in the 1988 radiocarbon dating of the Shroud, although I firmly believe that to be only viable explanation. All that I can do is to set out the evidence for: 1) what went wrong in that dating; 2) the anti-Christian bias and/or dishonesty of some of those involved in the dating; and 3) suggest various ways that scientific fraud could have occurred in that dating. And then leave it to the `men and women of the jury', my readers, to make up their own minds, based on that evidence.